A certain sense of achievement can arise following the break with organized religion. Many people rightly feel they have been freed from a prison of outdated practices and mentalities. Yet, the human need for belonging and confirmation has not disappeared. Neither has the inventive human spirit, always ready to prey upon its own in the quest for profit.

Consumerism is defined as a social and economic order and ideology that encourages the acquisition of goods and services in ever-increasing amounts. The way this behavior spreads and elevates its status in society is surprisingly similar with religious traditions. This text is about some rather amusing parallels that all but indicate that consumerism is taking advantage of the power void left by fall from grace of organized religion.

This is not to say that consumerism has any of the spiritual virtues that religion often promotes. That’s exactly the problem – consumerism is an economic tool that is capitalizing on an intimate need. It’s the wrong cure for something that isn’t even a problem. And it’s proving to be increasingly costly for the future of our ecosystem and thus, our quality of life in the coming decades and centuries.

Before we continue, it’s important to note that this text is not against commerce and certainly not against spending or making money. We all need to sustain ourselves. We have to trade. Companies need to make their products known. However, thanks to consumerism, the principle of “profit trumps quality and ethics” has entered a phase of dangerous, accelerated spread.

In the past few thousands of years we’ve been quite busy building various places of worship. This hasn’t changed with consumerism. There is a new type of building that has become not only popular but paramount to the faithful in almost any city touched by this new “religion”.

The shopping mall is where consumerism is preached to both those that are already converted and to those that haven’t yet become faithful shoppers. Here, people are busier than they’ve ever been in churches because the shops ensure there is some tangible value associated with the ritualistic visit. 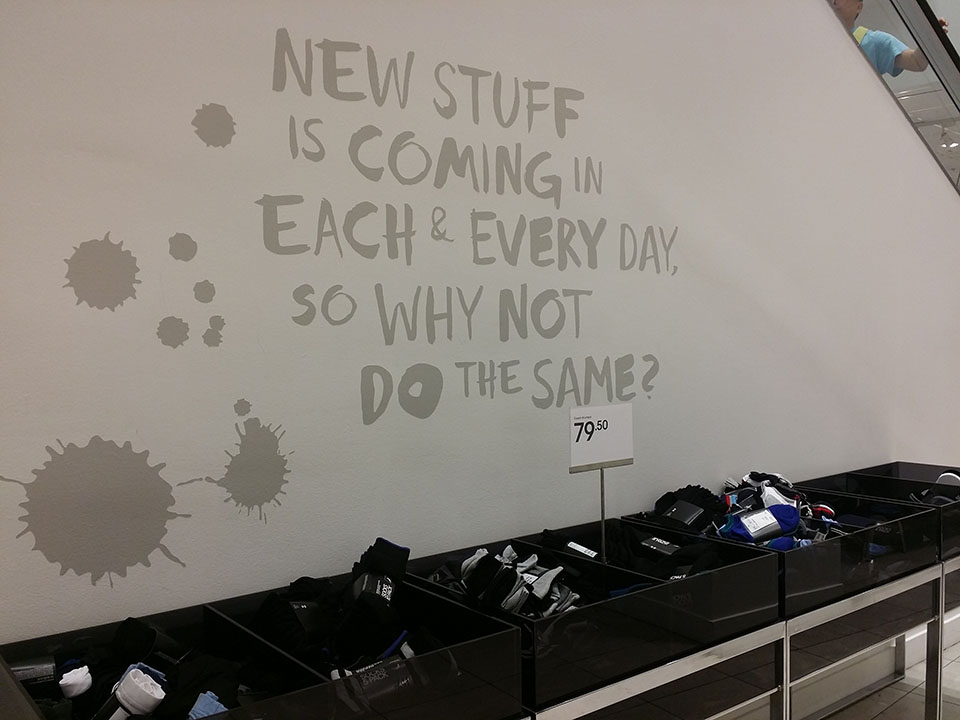 The image above is a perfect example of consumerist indoctrination. What sort of person goes to a clothing store every day? The consumerist faithful, of course.

While religions split into opposing organizations, cults and sects, in consumerism we have companies. These are headed by a sort of bishop known as the CEO or the president – which is sometimes worshiped like some sort of saint. Most respectable companies have a unique “brand identity”, represented by images, slogans and even vague principles. Everything is carefully chosen to provide maximum marketing value with a minimum of transparency and accountability.

Corporate followers are encouraged to wear and disseminate this illusory identity wherever they go. The new breed of faithful has less fervor than those that believe in the gods of old, which is probably good, because it would get pretty chaotic when fans of clothing brand X engage in holy war with those of brand Y. Even so, intense rivalries continue to exist. In what is a fortunate ideological regression, the fanboy has taken the place of the crusader.

Consumerist faithful sometimes undergo pilgrimages to far-away shopping meccas – large cities that host veritable mall-cathedrals. For the most part, this venture is preoccupied with gaining status rather than the acquisition of items with reasonable value. As with any pilgrimage, the result is internal satisfaction. Unlike spiritual journeys however, shopping satisfaction stems from a sense of advancement through society rather than personal evolution.

It’s perfectly fine for people to go out of their way to search and find products they love, including traveling to other countries. But for the consumerist worshiper, this is not a necessity anymore. It has become a habit, a social obligation and sometimes an unrecognized burden.

If consumerism were to have a creed, this would be planned obsolescence – a well-honed method of transforming value into junk as soon as possible. This is how consumerism funds its spread through the world. A vast amount of profit is generated by a system that takes resources absorbed from the earth, digests them in factories, puts them through the retail distribution system and then flushes everything as quickly as possible into landfills.

A significant part of the profit this organism produces is invested into evangelism. This goes way beyond advertisement. Huge sums are invested into opening new markets. This doesn’t mean only adapting and inventing products for those markets, but also modifying the cultural norms there. Sometimes social reformation takes decades of carefully planned reprogramming via mass-media, but the families behind the biggest names in manufacturing operate on a generational scale. For these pragmatic financial strategists, a century is a rather short time to accomplish the goal of economic supremacy.

A good example of social restructuring is the need to keep in pace with the latest fashion. People weren’t obsessed with perpetually upgrading their smartphones some years ago. But through clever marketing, based on merciless psychological manipulation, cultural norms were reformed. It’ll be “interesting” to see how the arrival of smart appliances and mainstream robotics will shape the commercial landscape.

Reward mechanisms in the brain mean that shopping can offer a quick – but very superficial – fix to other issues, either psychological or emotional. In consumerism, happiness is found in four bags loaded with products, deliverance is obtained through status. People educated in this economic environment find material substitutes for various emotional needs such as security or spiritual comfort. Unfortunately, there are few things indeed that are more insubstantial for one’s personal growth than substance itself.

The rampant, almost obsessive individualism that characterizes many societies –especially in the Western world – is a fertile soil for the consumerist dogma. It is quite likely that this was the intent in the first place. A divided society where people feel alone and disconnected is the perfect marketplace for all manners of fake medicine. Ripped from the support of true connection and friendship, many people wander meaninglessly across bland webpages whose only purpose is to guide them to the next shop.

Getting rid of consumerism doesn’t mean that companies that depend on it have to suffer. Like I mentioned in a previous article^, economic entities can adapt and invent new ways to compete. What is required is that we, as shoppers, support those companies that embrace sustainable methods. Products that meet such manufacturing conditions will be more expensive, but they will outlast their cheaper alternatives making the investment well worth it.

Consumerism won’t last forever, even if for no other reason that the simple fact that chain reactions, even economic ones, are not sustainable in the long run. The companies that prepare themselves best for the next economy will be those that will rule it. What we can do as members of society is to make everything possible to ensure a soft landing after the inevitable crash that will follow when the consumerist bubble finally bursts. In this case, let’s wish it ends with a whimper, not with a bang.

Completing this article’s tragi-comical mood, here’s an awesome video about the craziness on Black Friday. Perhaps the early third millennium shopper does have a crusader’s fervor after all.